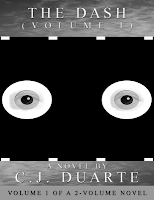 The only thing more difficult than trying to find time for great book in a busy schedule? Trying to find time for two. As I was reading O'Branagan's Threshold, I was also making my way through Volume I of The Dash - and both authors succeeded in sucking me into their worlds - Devin onto a ranch in Montana, and C.J. into the black-and-white world of Cloak Valley.

And I don't mean black-and-white in a rational, logical sort of way. I mean literally.

Claire Bead is a twenty-three-year-old Canadian woman with dreams of becoming a successful author, at the turn of the first decade of the twenty-first century. When she cuts work one day in a fit of desperation, Claire suddenly finds herself thrust into a dangerous bind, one from which she expects no escape. Just as suddenly, however, she feels her body disappear into thin air.


What follows is an epic mystery unlike any other, as Claire wakes up to discover herself in a whole other world: the picturesque, whimsical, black-and-white town of Cloak Valley, Monochrome. Crippled by an imperfect memory and by the fleeting uncertainty of whether she is alive and dreaming, or dead and dreaming, Claire, with the help of others, tries to make sense of the muddled existence in which she finds herself; to make sense of recurring visions, which may or may not be dreams within greater dreams; and above all, to make sense of her own fractured identity and intangible history. As she becomes more and more comfortable in a strange land, she prepares for a future that might be either some form of an afterlife, or the last rush of unconscious desires that fly through Claire's mind, before she meets her demise.

A sprawling tale of spiritual self-discovery, misadventure, terror, intrigue and romance, The Dash also provides its readers with an invaluable capacity for personal interactions, at the least expected moments. It is not only a story to be read, but a story to be experienced. Just as Claire must eventually find the answers to life's most profound questions, in an increasingly-formless world, so can the reader be thrust directly into Claire's viewpoint, and embark on an enchanting ride sure to both heighten the senses and nurture the heart.


There are some crazy fans out there. Fans of films, books, shows, and graphic novels that stand outside the lines of genre. Fans who are proud of themselves for their own unique tastes, and passionate about the often overlooked, but usually exceptional "cult classic". If you are one of these people, then you must pick up this book.

The story begins when Claire - for reasons yet to be explained - jumps out of a window. It just gets more bizarre from there. After she wakes up, she begins her exploration of a town full of fascinatingly odd characters, in a setting that very quickly takes the reader out of their own reality and plops them down unceremoniously into one that is, although very similar in many ways, a little skewed.

For me, stepping into Cloak Valley was a bit like stepping into a graphic novel. It's a world where everyone's reactions and emotions are exaggerated and where people's flaws and quirks become the focus-point of who they are, like walking caricatures. Not a single character fit the mould for a typical human being, and yet somehow could be related to, attached to. This is what I loved most about this book,and it is also what marks The Dash as something new and unique.

The plot follows multiple story-lines and multiple characters, but everything comes back to Claire as she tries to figure out what's going on around her. Another aspect I love about the book is the very deep feeling of metadrama that pops up occasionally through out. As a writer, it seems that Claire has the worst case of writer's block ever experienced. As a writer reading this book, I can appreciate that.

A project nearly a decade in the making, the dedication Duarte shows in crafting this piece shows in every vivid (if colourless) description and every character with a signature accessory. It is not only a novel, it is a craft piece of art, and, if you are prepared and willing to try something new and different, then I recommend you order the book here. You won't be disappointed.
Posted by Krista Walsh at 6:48 AM